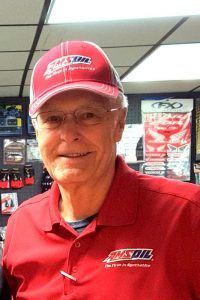 I became an AMSOIL Dealer in 1976. Although AMSOIL products had been on the market for about four years, I had never heard of the product or the company — spelled “AMZOIL” back then.

Honestly I don’t remember how I heard of it or how I ran into my sponsor. But I do remember why I became an AMSOIL Dealer! In my case, it had little to do with the superior qualities of synthetic lubricants. It had everything to do with me wanting to have a business of my own!

I didn’t consider myself a salesman at all; that just wasn’t my nature —or so I thought. But I did know that if I was selling anything, it had to be something in which I believed. AMSOIL met that test then and AMSOIL meets that test today, about 40 years later!

I worked it fairly regularly in the early years. Then life got in the way and my job required a lot of travel so I didn’t spend much time on the business. But I continued to get a few customers and we kept our AMSOIL business alive. We’d even get a commission check now and then!

In 1999 I retired from my day job and began paying a bit more attention to our AMSOIL business. It really started to grow a few years later when I was called by a young man who wanted to become a Dealer. The truth is, his ambition and success has motivated me to work harder!

The hard work paid off and we were named Direct Jobbers in 2014! That is definitely one measure of success! The young man who motivated me to action will probably become a Direct Jobber within the next two years. I mention this just so you know that it doesn’t have to take over 30 years to become a DJ!

We’ve spent the last ten Winters in Texas. While there, I’ve been working to establish an AMSOIL presence in the Rio Grande Valley, with some success. As I result, I have a group of Dealers, Customers, and Accounts in both Iowa and Texas. Geographic diversification, one could say!

That’s pretty much my AMSOIL story.

If I can help you in any way with AMSOIL, please contact me! I’ll do whatever I can to help you enjoy the AMSOIL relationship as much as I have.